After 1066 King William asked his Norman Barons and Knights to control England for him. One of these Barons is Roger de Poitou. He was given Liverpool and Manchester to look after.

In 1100, Roger de Poitou built a Motte and Bailey Castle in West Derby for his knights to live in.

Documents from 1213 show 140 soldiers, 10 knights and 10 crossbowmen stationed at the castle. However, it is more likely that they were spread across the whole of the 'West Derby Hundred' (the name for the Merseyside area at this time). The castle would have been only large enough to home 50 or so people.

The Castle would have allowed the Knights to see right across the east of Merseyside, down past the River Alt. Being near Croxteth park would have provided firewood and food. Although why they didn't build it higher up at the top of present-day Mill Lane is a mystery.

West Derby Castle was made of two parts. The Motte was a raised hill (earthwork) with a wooden fort at the top. This high-up fort would have given Roger's knights a great view of the surrounding area.  The ‘Bailey’ is the lower part. This was a courtyard where peasants and animals would be kept. The two parts were then surrounded by a water Moat with a drawbridge connecting them. Being wooden, they were quick to build. Especially in West Derby, which had a huge forest.

After the founding of the town of Liverpool in 1207 people started to move from West Derby towards what is now the city centre.

The Castle was abandoned by 1297 and was reported to be in ruins by 1327. The soldiers were all moved to the new Castle near the waterfront (present-day Castle Street) The earthwork mound was and the site leveled in 1817. Today there is a rose-garden on the site. Just behind St Mary's school. 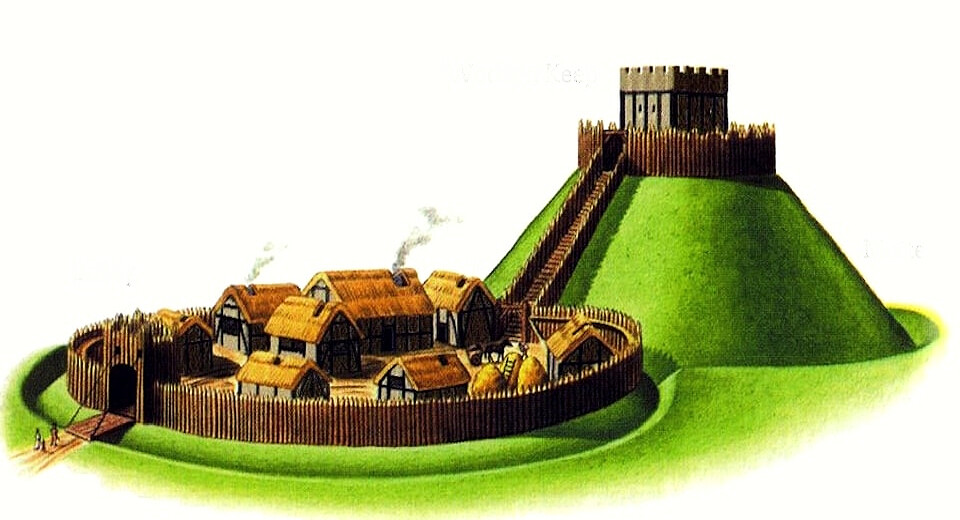 West Derby Castle - Then and Now

Swipe across to see roughly what West Derby's Motte and Bailey Castle would have looked like and where it stood.