Map of The West Derby Hundred

On 5th January 1066 King Edward III died. He was known as Edward the ‘Confessor’. This is because he was a very religious man (and confessed or admitted his sins).

Edward had no children (heirs) to the throne. This resulted in two powerful landowners fighting to decide who was to be the rightful king of England. They were Harold Godwinson (brother of Edwards’s wife) and William of Normandy (Edward’s cousin).

The battle they fought in is the most famous in English history. It was, of course at Hastings. A small village in the South East of England.

So what did this all have to do with Liverpool History? 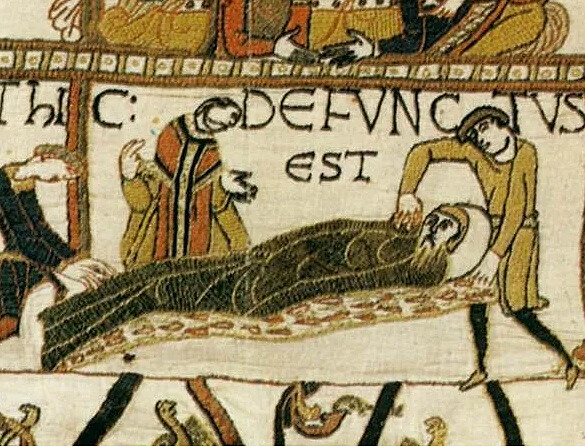 The Battle of Hastings

As he marched into battle at Hastings, Harold Godwinson had already been crowned as the new king.

Before the battle of Hastings, Harold had already been in another battle at Stamford Bridge in Yorkshire. Here he fought another claimant to the throne, Harald Hardrada, The King of Norway.

Harold's army travelled up and then down the country and drafted in people to help in it.

For most people, however, life carried on as normal. Most of the English population (about 2 million people) would have had no idea a battle for the crown was about to take place. They would have just carried on farming their fields as usual.

Liverpool people at the Battle of Hastings

West Derby, in Liverpool, had several Hawk Aeries. This was a place to train Hawks to hunt and catch food. People with hawks were known to be in Harold’s army at the time and some of them may have been from Croxteth Park in West Derby?

The Domesday book records there being 128 ‘cottages’ in the area we today call Liverpool. One cottage in every five had to send a person to do their service for a few months in the King's army. This service in the army was known as fyrd. Therefore, people from this area would have been drafted into the army. Especially, as a huge battle at Hastings was looming.

The number of cottages could have been double, as most farms and cottages in the Domesday book are not actually listed.

However, there is a chance that someone on the Bayeux Tapestry is one of your ancestors!

Liverpool in The Domesday Book

In 1086 the new King, William of Normandy, ordered his men to survey and record the new land that he had conquered. The king sent his officials out across the country to write down a huge list of every person, household and even livestock (animals) that they found.

The 900 pages of the book were made from sheepskin. The skins were washed and scraped to remove the animal hair and then stretched out to make parchment. The book was written in Latin using a goose feather quill.

The word 'Liverpool' itself is not listed in the Domesday Book. This is because 'Liverpool' was just a name given to a small fishing area near the river Mersey. A tiny village with probably just a handful of wooden houses?

The Domesday Book recorded roughly 120-150 farms/settlements in Merseyside at the time. However, a lot of homes and people are NOT listed.

Assuming each family farm had 5-6 people living in it. The population of the area could have been 500 - 1000  people?  It is very difficult to fully establish.

When King William’s officials visited this area in 1086, they would have called it the ‘West Derby Hundred’. It covered the whole area that today we call Merseyside.

The book allowed William to collect taxes from everyone in the country more accurately. Domesday means ‘judgement day’ and William used it to better judge the land he had just conquered. Read the Merseyside (West Derby Hundred) Domesday page entry.

The problem in collecting the information was that William’s men spoke Norman-French. Meanwhile, the English spoke ‘Old English’ (Anglo-Saxon). Also, Merseyside had a lot of Old Norse roots/language. To further complicate things, the book was written in Latin!

The English would never have heard anyone ask them questions about what they owned before. They were fearful of having to pay more taxes on what little they had, so did not tell the whole story. This is why the Domesday book cannot be trusted 100%.

The knights who wrote the Domesday record for this area would have probably been based at a small Motte and Bailey Castle at West Derby. You can read more about this here.