On the 28th August 1207, King John decided to make Liverpool an official town by giving it a Royal Charter.

Before having a Charter, everything in Liverpool belonged to the King. The Charter gave the local people more freedom in the things they bought and sold, and generally improved their lives.

King John invited people to come and live in Liverpool. They could now rent a house and a piece of land to grow things. The population at the time was about 1000 people, mostly concentrated around a small area of seven streets.  Small pockets of houses existed around the rest of the area, West Derby, Wavertree, Walton etc.

The Charter allowed Liverpool to have a weekly market. As a result, more people with skills and trades came to settle in the area. A court was set up to help people sort out their problems, and a Ferry service to take people across the River Mersey.

King John is usually shown as the nasty ruler of the Robin Hood stories. However, he did a lot for Liverpool and also the whole country. He signed an important agreement known as the Magna Carta. This made him the first-ever King to agree to a set of rules about they ran the country. 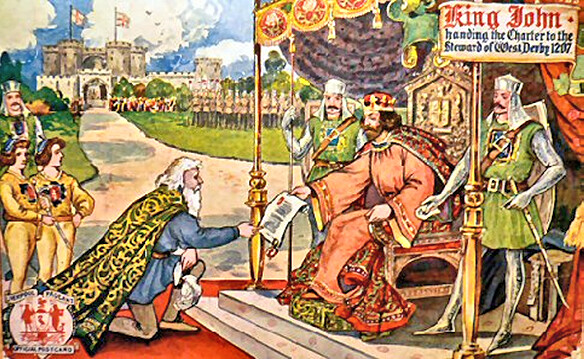 The origins of the name Liverpool

Medieval Liverpool was known by lots of different names. This is because not many people could write and there was little common way of spelling.

At this time, Liverpool was written as:

The original Seven Streets of Liverpool

In 1207 Liverpool was still only a tiny village made up of just seven streets.

Many of these streets survive today.

The seven streets were: 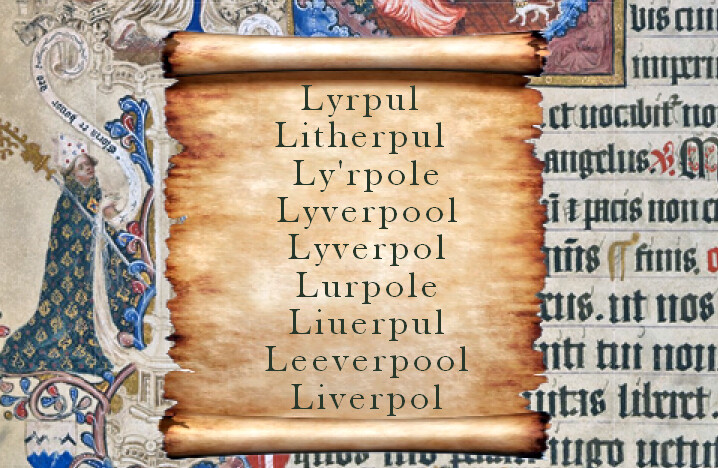 Medieval Liverpool Then and Now Photos

Slide the bar across to see where the original Seven Streets of Liverpool where.
Notice how the pool of water comes in right through the present-day city centre.

The medieval feudal system was based around a hierarchy. It showed who was in charge of who across the land.

At the top of the feudal system was the King. He gave lands over to his Barons.

The Barons were rich noblemen. Many had been given pieces of land from back in the Norman Conquest. The main baron in Liverpool at this time was Thomas, Earl of Lancaster.

In 1310, he set the annual land rent in Liverpool to be 'One silver penny per year'. For this, you could own a strip of land and had the right to dig peat in Toxteth Deer Park!

The Barons, in turn, gave land to the Knights.

The Knights were the tough guys. They received their land for providing protection and military service. In Liverpool at this time, this would probably have been the Molyneux and Stanley families. Read more about them here.

Finally, the Knights gave land to the peasant farmers in exchange for food.

Bottom of the heap were the peasants – also known as serfs or villeins.

Because of the villeins low status, the term ended up being used today to mean villain (a bad person). The villeins life was a bad one, working six days a week and probably dying by the time they were 30.

Most peasants in the feudal system were little more than slaves. They could only keep a small portion of what they grew, they also had to ask the local Baron for permission to leave the manor or to even marry someone!
The more skilled peasants were known as freemen became craftsmen – carpenters, bakers, blacksmiths and so on. They were known as journeymen and could travel from town to town selling their wares.

Like most of the country, scouser villeins were mostly farmers and craftsmen, but a lot were fishermen.

Far from a backwater hovel, Medieval Liverpool was a thriving port. It was full of exciting food, drink and clothing from around the world.
Providing you were clever enough not to end up a farming peasant you would have probably really enjoyed life.

Liverpool's only remaining relic from medieval times is it's Sanctuary Stone.

It can be found on the pavement in Castle Street. Unlike the natural stand-stone of Merseyside, the Sanctuary Stone is made of dark volcanic rock. It is believed to have been used to mark out where the city market used to be.

The only other relic from this era is an ancient document with a seal that can be found in the present-day museum. Aside from that, the only things that have survived are medieval street and place names.

In addition to the Seven Streets, More Hall, Cross Hall, Tower Building and the Molyneux (Sefton / Croxteth) Cross are all that remain.