Liverpool in the Middle Ages.

The history of the Stanley and Molyneux families.

This is a 'forgotten' period in Liverpool History. It covers Liverpool in the Middle Ages.

The Middle Ages are the years after the Black Death but before the Tudors. (roughly 1350 – 1500). It includes both the 100 Years War and the War of The Roses.

During this period two rich families controlled the Merseyside area. They were the Stanley family and the Molyneux family.

Their legacy lives on today in many Liverpool place names, buildings and symbols. 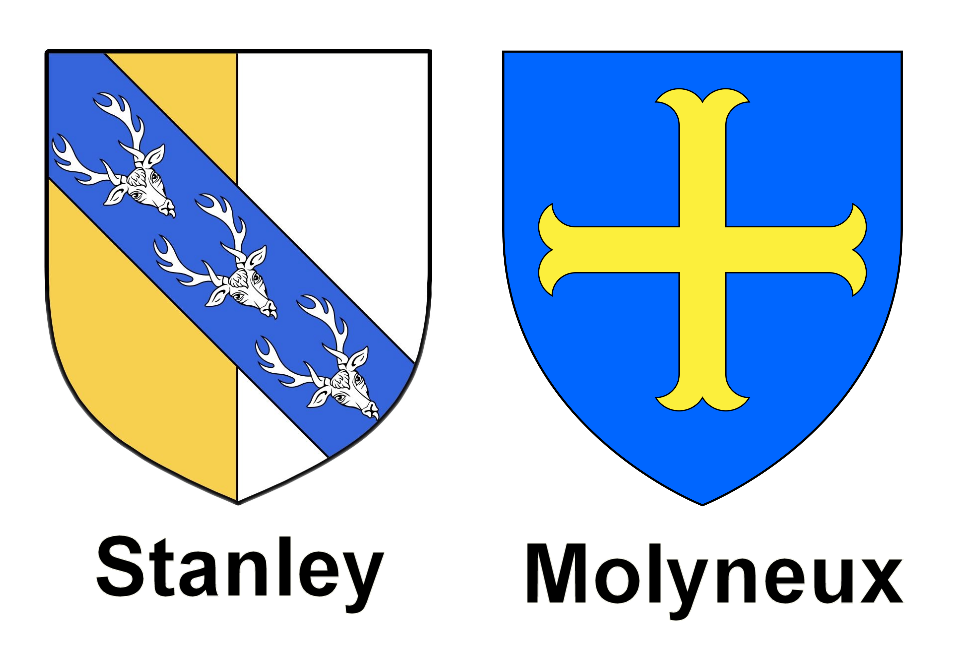 The plague had hit Liverpool badly, killing a quarter of the population. During the late 1300s and early 1400s, it entered a period of lawlessness and poverty.

The Stanley family were asked by the King to help take control.  They were descended from Norman Nobility and were rulers in the Isle of Man.

The Lathoms were another rich family in the area. They had also been rich landowners since Norman times. They owned much of what is now Knowsley.

At the tournament, John Stanley triumphed by beating the dreaded French Admiral of Hainault. He was knighted by the King. Soon afterwards John Stanley married Isabel Lathom and John inherited her land and wealth. 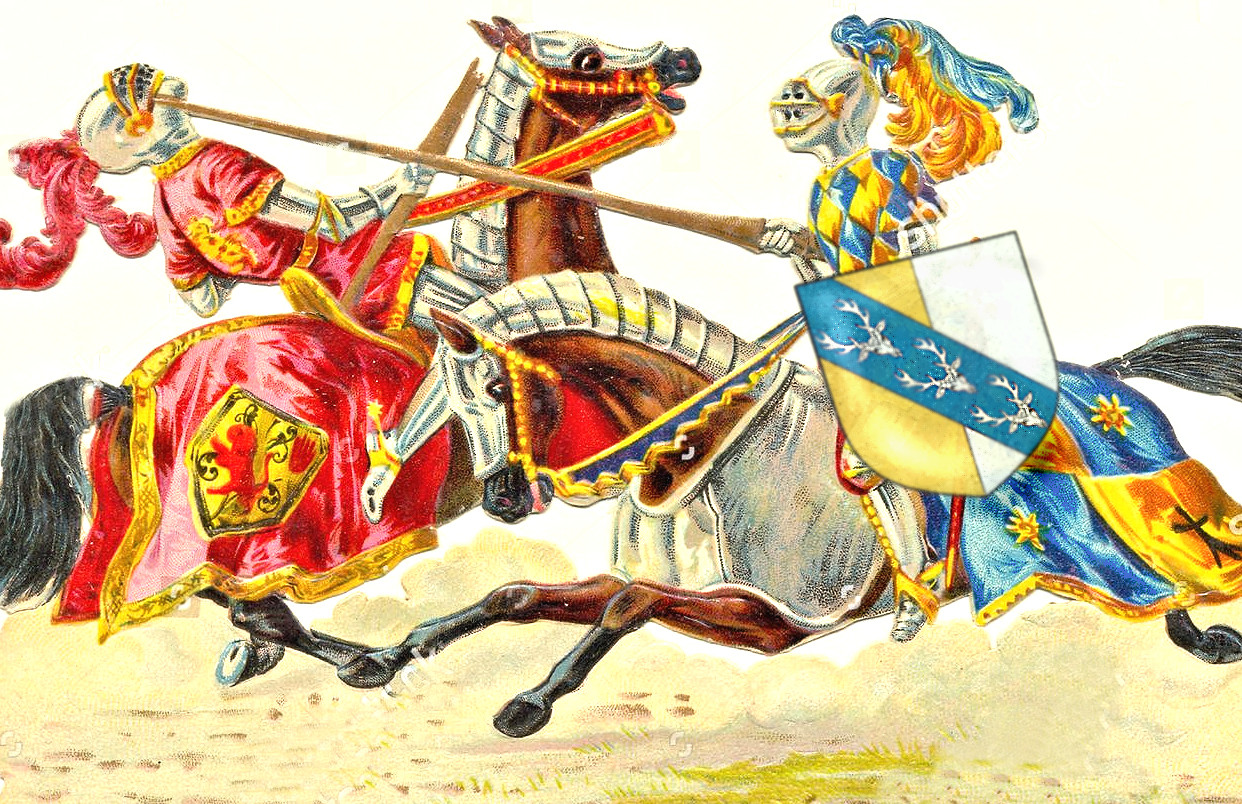 The Eagle and Child

This story begins with Isabel’s father Sir Thomas Lathom. One day, whilst walking in woods, he found a child underneath the nest of an eagle.

The child was said to have been protected by the eagle. He was named ‘Oskatel’ (meaning foundling).

Oskatel became Sir Thomas' adopted son, and was all set to inherit the Lathom family fortune.

On his deathbed, however, Sir Thomas decided to give most of his land over to daughter Isabel and not the 'eagle child' Oskatel. The Lathom fortune now moved to Stanley as he had married Isabel.

Because of this legend, many pubs are called The Eagle and Child.

The Stanley family now needed protection for the inherited wealth. In 1406, they build The Tower of Liverpool. A huge fort in present-day Water Street.

The Tower was very close to the existing Liverpool Castle. It gave the Stanley family protection to sail back and forth to the Isle of Man.

Like lots of wealthy noblemen from the middle ages. The Molyneuxs descended the knight who came over during the Norman Conquests.

The Molyneux family were descendants of William de Molines. He came from a town called Moulineaux, in Normandy, France.

The Molyneux family settled in Lunt, Sefton. They used to have a Hall there, near the present-day St Helen's Church. They owned most of the Sefton area.

In 1575, they made their home at Croxteth Hall in West Derby. It was in this area that the Norman knights had originally settled in 500 years previously.

Their family crest is the Cross Moline. It is still used by Sefton Council and Croxteth Country Park.

The attack of Liverpool Tower

In 1421, the King allowed Richard Molyneux and his soldiers to live at Liverpool Castle. This was an arrow shot away from the Stanley Family’s tower.

In 1424 a violent feud broke out between Thomas Stanley and Sir Richard Molyneux.

Richard Molyneux marched on Stanley's Tower with 1,000 men ready to do battle. The Stanleys were waiting in the tower with double the men waiting for the attack.

Before a scouse civil-war broke out,  the Sheriff was called in. Eventually, an order from King Henry VI told them to ‘calm down’.

The feud between Thomas Stanley and Richard Molyneux was soon over. Later their respective son and grand-daughters are married and they all lived happily ever after.

The Tower was used as a prison until 1819 when it replaced briefly by warehouse buildings. In 1856 a third building was placed there. This, in turn, was replaced in 1908 by the present Tower Building today. (Directly opposite the Royal Liver Building).

Images of the Tower of Liverpool

Since 1066 the rulers of England and France were very closely related. The French noblemen who came over in the Norman Conquest soon considered themselves to be English, but the still controlled lands back in France. This caused problems in the long term.  When French King Charles IV died without any male heir, a long series of wars started between English and French royalty for who was the rightful ruler of France.

The 100 Years War was really a series of separate battles from 1337 to 1453. The English won most of the battles and at one point England ruled over half of France, but by the end, it was all French again.

The Liverpool families at the Battle of Agincourt.

Liverpool’s Molyneux and Stanley families took time off from fighting each other and went over to France to fight.

On 25th October 1415, a huge battle took place at Agincourt. The English King Henry V had 6000 men (mostly longbow archers on foot). They faced a French army of 30,000. Many on horseback.

The Agincourt battlefield was thick with mud. The French knights wore very heavy thick armour making it very hard for them to move.

Agincourt was a disaster for the French. They had too many men and could not move in the thick mud of the battlefield. Stuck in one place, they were slaughtered by the English longbow archers.

After the English victory, both of them were knighted by King Henry V.  Richard Molyneux was also given Croxteth and Toxteth Deer Parks. The people that the Molyneux and Stanley families took over to fight at Agincourt were normal Liverpool people. They could have been your ancestors.

The War of The Roses

The War of the Roses was a conflict between two rival royal families to decide who should be King of England.

The conflict started when the ruling Lancastrian King Henry VI became mentally ill. He was blamed for losing the French lands during the 100 years war.

A series of battles take place with the crown crisscrossing between the houses of York and Lancaster many times.

By 1483, the crown was due to go to Edward V. He was a 12-year-old prince and being looked after by his uncle Richard.

The Princes in the Tower

Liverpool's Thomas Stanley was given a job by Richard to be the main guard of the Tower of London.

This meant Stanley had complete access to the tower, included the area where the Princes slept.

To secure the crown for himself, it is rumoured that Richard had Thomas Stanley murder the young Princes.

In 1483, the Princes disappeared without a trace from the Tower of London. However, hundreds of years later their two skeletons were found hidden in the tower walls.

With the two princes gone, Richard became King Richard III. He invited Thomas Stanley and his Liverpool army to the next Roses battle at Bosworth against Henry Tudor.

The Battle of Bosworth

Towards the end of this battle, the Lancastrians were getting beat. This included Stanley and his Liverpool soldiers.

At the last minute, Stanley decided to swap sides and fight on the side of Henry Tudor instead. King Richard cried out “Treachery” at being double-crossed.

At the end of the battle, Stanley and his Liverpool men that found the dead King Richard under a hawthorn bush. They took his crown and placed it on the head of Henry Tudor to crown him the new king.

After the Battle of Bosworth, The new king Henry VII gave Stanley the title of Earl of Derby. This refers to the ‘West Derby Hundred’. In later years the Stanley family settle at what is now Knowsley Hall.