Outside of London, Liverpool was the most bombed area of the country during World War Two.

The bombing was known as The Blitz. This is from the German word Blitzkrieg, which means lightning war.

The bombing was designed to destroy Britain and demoralise us into surrendering. It didn’t, and the people’s fight would be later called the Spirit of the Blitz.

Liverpool was attacked because it had a huge port. It brought in much-needed fuel, weapons and raw materials into the country.

Britain may not have won the war without the port of Liverpool. Hitler and the German airforce wanted to bomb it to stop these materials from coming into the port. Also, a lot of food was imported into Liverpool.

Liverpool was also the main link with America. Hitler knew that American troops would on day arrive at the Liverpool port.
It is thought some 4000 people died in Liverpool during World War Two, with 100,000s left homeless due to the blitz bombings.

The May 1941 Blitz Liverpool Bombings

On 1st May 1941, there was a new German attack. They bombed the entire city continually for a whole week.

At one point during the Liverpool May blitz, a fleet of almost 700 German bombers attacked the city.

The bombers attacked at night. Because of this, people were told to use thick black curtains and use very little lighting.
The streets and city buildings would be in total darkness. This meant they were harder to spot from the air.

The blitz on Liverpool was mostly hidden from the radio and newspapers at the time. The British Government did not want the rest of the country knowing the true extent of the damage. They rightly feared it would scare and demoralise other British people.

The signs of the Blitz are still here today. Many parts of Liverpool have been left untouched since the bombings. Most famously St Luke’s, the ‘Bombed-Out Church’ on Berry Street.

The 10th January 1942 saw the last air-raid on Liverpool. It is on this night that The German Luftwaffe bombed the house on 102 Upper Stanhope Street where Hitler himself once lived. (Read more about Hitler living in Liverpool here)

The Liverpool war-effort affected everyone in the city. Many factories and warehouses turned to create bombs and other war ammunition.

People tried to live as normal a life as possible during the war. Liverpool Pubs, shops, cinemas and theatres all stayed open.

After the blitz, Germany turned towards fighting Russia instead of bombing Britain. The Liverpool people started the huge job of clearing up the destruction left behind by the bombings.

The sites of many bombed buildings were cleared, dug over and then used as allotment gardens to grow vegetables on. They were known as ‘Victory Gardens’. 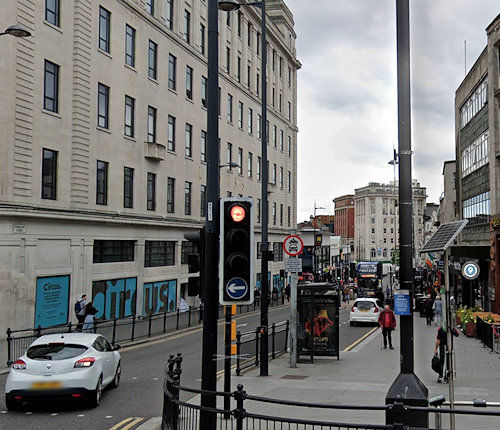 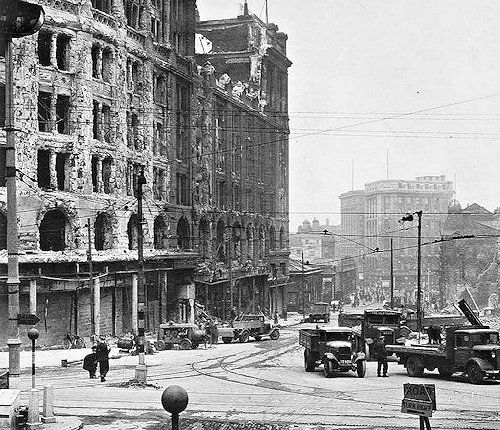 War was declared in September 1939. Immediately the Government started to move children out of Liverpool and other major UK cities for their safety.

This massive movement affected 100,000s of children. It was known as the Evacuation, and code-named “Operation Pied-Piper.”

The government knew that millions of adult lives could be lost in the fighting and the bombing of cities. It could not afford the next generation of children to die also. It was decided that they would be safer in the countryside. When the bombing stopped they would be able to return.

The evacuation was designed to make sure there would be a generation left to live on after the war ended. The government feared the worst and planned ahead for it.

Rural North Wales did not have an important port or factories. Therefore it was not a target for the German army like Liverpool was. Therefore, it was felt Liverpool children would be safe there.

Some children were sent via ship as far as Canada and even Australia. Many of these children never returned.

North Wales was not ideal, there was little housing or electricity. Also, lots of people spoke only Welsh.

However, most Liverpool parents understood that if their children were to survive the bombing they were best to leave the city. Some parents did not want their children to go and kept them at home.

When the evacuees left, some thought they were just going on a day-trip. They did not realise they were going to live somewhere else, with another family for many years!

Life as an evacuee child

Most Liverpool children had grown up in a dirty, industrial 1930s city. Moving to North Wales was their first smell of clean air. It was their first taste of fresh, home-grown country food.

For many, the Evacuation was a time of freedom and discovery. Some even learnt to speak fluent Welsh.

Some children, however, found themselves being used as unpaid ‘slaves’ by the people chosen (and paid) to look after them.

It was not until many months after the war had actually ended that the children returned home.

Liverpool was in ruins, but its children and future had been kept alive.