The English Civil War tore the country apart. It was not a war with another county, but a war within our own. People who were once friends were suddenly killing each other in battle.

People fought for who they thought should rule the country; The King or Parliament. It killed more people than World Wars I and II combined.

The Civil War came to Liverpool in June 1644.  A huge battle took place across the whole area of the city centre. Liverpool Castle was stormed in a battle called the Siege of Liverpool. 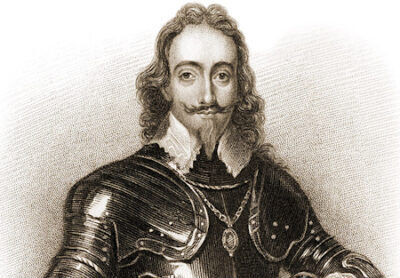 The origins of the English Civil War

In 1625 Charles I became king. He believed in the Divine Right of Kings. This meant he believed he was a God's representative on earth. He decided to rule without a Parliament.

Charles also angered Parliament by marrying a French catholic Queen. Parliament did not like this because they were Protestants. Furthermore, many were very strict Puritans. The Puritans did not like the excess of the Catholic Church ceremonies.

Because Charles had no parliament to provide him with money, he introduced new taxes which people hated.

Charles started to have many arguments with parliament. They tried to pass new laws to reduce the king's powers and give greater control to themselves. Parliament was also concerned the country could become catholic again.

On 4th January 1642 Charles I burst into the House of Commons with 400 soldiers. He wanted to arrest five Members of Parliament that he accused of treason. However, the five people were warned in advance and fled the scene before the king got there. 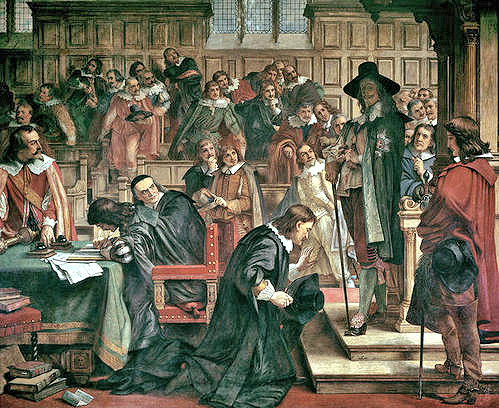 In 1645 an army general and Parliament supporter, Oliver Cromwell created the ‘New Model Army’. This was a fighting group made up of everyday people. They were led by people picked because of their fighting skills and not just how rich or aristocratic they were. Which was how people ran the army previously.

Parliament’s New Model Army wore red coats and ‘lobster pot’ helmets to help protect their head, neck and face. They were known as Roundheads due to their shaven heads.

In 1646 the King gave himself up to Parliament. Parliament put the King on trial and he was sentenced to death on a cold January morning in 1649.

At the start of the Civil War, Liverpool was under the control of the crown. The Molyneux and Stanley families, who both ruled the area, both had royal connections.

Stanley owned Childwall and therefore, it is possible that his Royalist army was based there. They were known to take up positions at the east of the city, in preparation for Parliament to attack.

Parliament's army advanced on Liverpool from Manchester and Wigan. Therefore, Childwall would have been an ideal spot to see the advancing army.

Although it was never recorded in history, it is believed that some form of Civil War battle took place at Childwall.

In years since cannonballs and long swords have been found in the area. These have been verified and displayed in the city museum.

On the other hand, there are records of an 'anti-catholic' riot in Childwall in 1600. This came about because of the Recusancy Laws that forbid catholic worship.

Roundheads or rioters, something sinister happened in Childwall in the 1600s.

Today, there is an area by the side of All Saints church known as ‘Bloody Acre Field’.  A small field that is believed to be a partial battle (or riot) site. Many people believe this part of Liverpool to be haunted.

Whatever happened at Childwall, it was not enough to stop a 1000 strong army of ‘Roundhead’ Parliament forces. They arrived in Liverpool and marched on Liverpool castle. Other Roundheads arrived via boat from the Mersey.

Parliament's Roundhead army killed 80 Liverpool Royalists and took 300 of them as prisoners. They gained control of Liverpool Castle in April 1643. The Molyneux family and other Royalists fled to high up land around Everton for protection.

The Roundhead army then dug huge trenches to protect themselves from Royalist revenge. The maps below show where trenches were dug all over the city centre.

The trenches dug across Liverpool were ten meters wide and three meters deep. Evidence of them is often found when digging work takes place today.

With cannons pointing out eastwards, the Roundheads sat and waited for the Royalists to attack. The siege of Liverpool was about to begin.

This map shows Royalist trenches along what is now Lime Street.
They pointed downhill (westwards) towards the Parliamentarians in Liverpool Castle.
Townsend Bridge (across the old pool) was between present-day Fontenoy Street and Byrom Street.
The 'Road to Prescot' is present-day London Road - William Brown Street - Dale Street.

This map shows a temporary mudwall fort along the side of Moor Street (present-day Tithebarn Street)
Also shown are a series of cannons along what is present-day Lord Street and Whitechapel.

Excellent quality versions of these, and other old Liverpool maps, can be found here

Prince Rupert was from the Rhine in Germany. He was a popular, dashing and adventurous young Royalist leader.

He arrived at Liverpool with an army of 10,000 men. To put this amount of soldiers in context, the whole population of Liverpool at this time was roughly 2000 people.

The dog (called Boye) was thought to have magical powers. It is said that it could sniff out buried treasure and catch bullets in his mouth!

Rupert’s monkey was thought to be a ‘shape-shifter’. This meant it could disguise itself and even turn invisible to spy on the enemy!

Both the Dog and the Monkey were well reported in newspapers of the day.

In June 1644 Prince Rupert moved his army from their headquarters at Everton Brow down to Lime Street. This allowed him to look down towards the river and the Roundheads at Liverpool Castle.

After many days of fighting, Rupert decided to use his cannons at night time. Liverpool's ‘Royalist’ Molyneux family helped Rupert plan his night-time attack. They had been smuggling secret maps to him about the layout of the town. Before long, Rupert’s men took over Liverpool Castle.

This fight is known as the Siege of Liverpool.

Prince Rupert's set about torching the town and wrecking the castle. They stole much of its gold and treasure. King John's original Liverbird ‘seal’ was lost during the siege.

The treasure Rupert stole was buried in tunnels under the Everton district and never seen again. The tunnels still remain, and the stolen treasure still thought to be buried somewhere in them.

During the siege of Liverpool, Prince Rupert and presumably his dog and monkey, all lived at a cottage up on Everton brow. This is nearby where the Everton lock-up ‘tower’ stands today. Today this is known as Prince Rupert’s Tower.

Liverpool Castle never recovered from the damage of the Seige and it was demolished about 50 years later. Its bricks were used to build the city's first-ever dock!